Did you ever get rid of a collectible only to regret it later? Yup, I've done that so many times I've lost count. Case in point: the gorgeous WWII figures produced by 21st Century. I had the whole series at one time only to sell it off. Wellll, it's back to the drawing board as my interest in military toys grows again. Oh well. Today we'll start a new series of posts looking at this 21st Century set from 2000, one of their earlier offerings. It was around 2001 when 1/32 scale diecast and plastic WWII airplanes, armor, and figures started catching my eye and I bought (seemingly) every shiny bauble on the shelves. After years of laying around The Cave though, with room running out to store toys, I started getting rid of them. Right now there's maybe a handful of toys left out of the dozens that were gathering dust out there, some were sold, and many unopened toys were given away at Christmas toy drives.

Okay, fast forward to today and I've wanted to start playing a little with these things and decided, "Hey, maybe buying back some of this stuff would be okay." Soooo, here we go. My first re-acquisition of a set sold off a year or so ago. As you peruse the photos over the next few days, you'll see why these were some of the finest 1/32 scale sculpts on the market. AND they were very price-worthy at about $10-$12 brand new. Today this set goes for ~$20-$24 which is still within reach. Enjoy! Opa Fritz and Oma Bettina 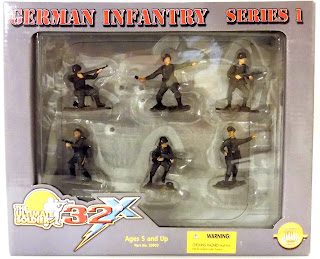 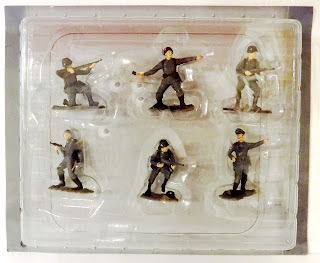 The same artwork is on all four sides of the box 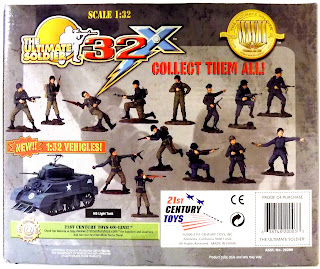 The set consists of six figures molded in plastic with painted details. As the individual poses are posted over the next few days you'll get a better appreciation of the detailing.

Posted by Ed and Bettina Berg at 6:13 AM