**** FLASH!! WE INTERRUPT OUR FLINTSTONES POSTS TO BRING YOU****
THE END OF THE WORLD

And now a word from our sponsor:

Today is December 21st, the end of the Mayan 'Long Calendar' and purported by some to be the end of the world. Fine. On that note I'm gonna kick back in the house, have a nice cold egg nog and wait for it. Bring it on world, let's see what ya got!! For those of you not in the know, the weak minded alarmist out there claim the rogue planet Nibiru, as yet not proved to even exist except in the minds of the delusional, is suddenly going to appear from the far side of the Sun and slam into Earth today. This egregious nonsense has been a staple 'end of world' fairy tale for decades now in Western culture, promulgated by irresponsible mass media outlets. Some years back, a certain cable channel claiming to be all about history decided, I guess, that there wasn't enough history to cover on a 24/7  basis so they picked up on the 'end of Mayan Long Calendar as a sign of the end of times' theme and ran with it (along with other Doomsday/Armageddon scenarios). They drove this drivel down viewer's throats for years as if it were already written into the history books (hmmmmm, if the world did end WHO would be left to write the history books?? - sorry, I digress). My worry is that some may fall prey to this and do themselves or others harm, as often happens when followers of doomsday cults and prophesises of dread take things too seriously. I predict that, should there be unnecessary acts of violence by these misguided souls against either themselves or others, and that IF it was shown their obsessions were fueled by overwhelming media coverage that there will be some nasty lawsuits against the channels/stations that aired these shows - as well there should be! Well doomsdayers, Hollywood has already covered the colliding planets theme a long time ago: 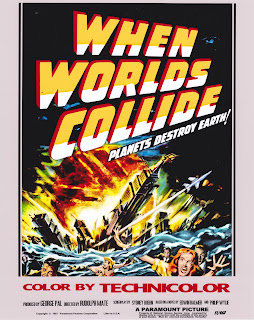 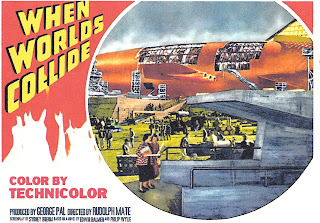 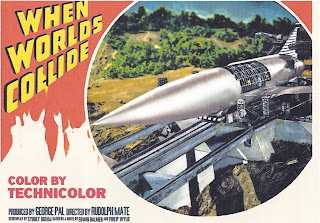 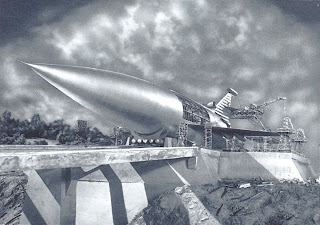 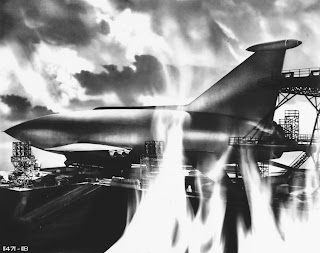 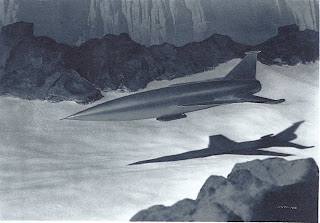 
**Pegasus Hobbies WHEN WORLDS COLLIDE
Space Ark Diorama**
Enough editorializing and on to the toy, because after all this is primarily a toy blog. Today's toy is the Pegasus Hobbies model of the 'Space Ark' from the movie When Worlds Collide.  And what an unusual toy this is. Why? To the best of my knowledge this is the only mass market toy directly linked to an End-of-the-World scenario.  First written in 1933 by Philip Wylie and Edwin Blamer, When Worlds Collide is quite simply about a rogue planet - Bronson Alpha - slamming into Earth and destroying it. A race is on to build a space ark peopled with a select few of Earth's population along with animals, etc. - in a nutshell Noah's Ark goes to space. In 1951 Georga Pal directed the big screen version of the story on which the Pegasus model is based and the Space Ark itself was designed by famous sci-fi/space artist Chesley Bonestell. The movie starred Richard Derr, Barbara Rush, and Hayden Rorke and is a classic sci-fi movie of the 1950s.

Pegasus offers the Space Ark in two formats: a model kit, and a ready-made diorama. I chose to buy the built-up diorama which essentially comes in two pieces: a built-up launch rack and separate ship. The base and launching rails assembly is quite nice with the base depicting a rocky landscape with some greenery strewn about. While the base is one-piece, the launch rail assembly is comprised of a number of pieces neatly pre-assembled by Pegasus, is not permanently attached to the base, and can be easily detached. I noticed in one of the head-on photos that there's a slight wiggle in the rails so they're not perfectly straight but this was mostly unnoticeable when the ship is sitting on its take-off sled. The Space Ark is a beauty. She's got a bright chrome covering - actually quite brighter than the exterior finish seen on the ship in the movie - but it does make for a shnazzy display. The overall diorama length is 14" (35.6cm) x 6 1/4" (15.9cm) W x 5 1/4" (13.3cm) H. The Space Ark is 11 3/4" (29.8cm) H x 6 1/4" (15.9cm) W. The box insert is a nice wrap-around photo which, if bracing were glued to it, would make for a nice shelf display. This space ship stands on its own as a classic example of 1950s 'pointy-tube with-fins' rocket ship design. Enjoy! 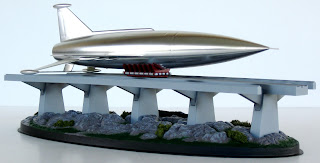 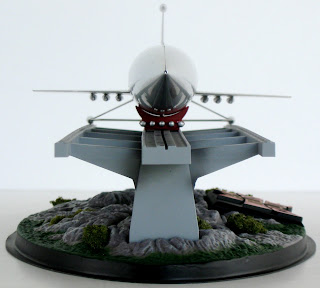 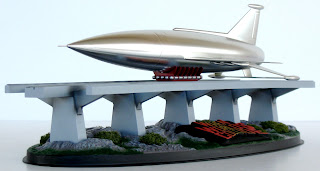 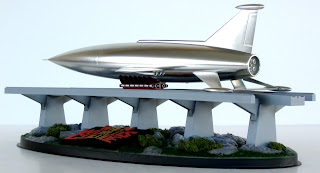 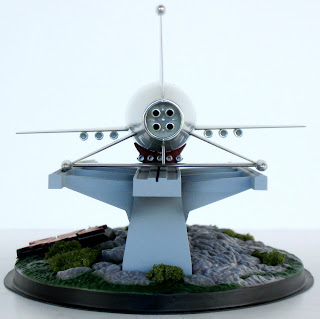 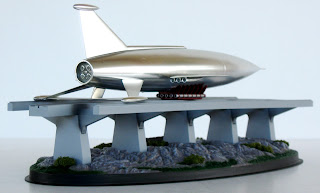 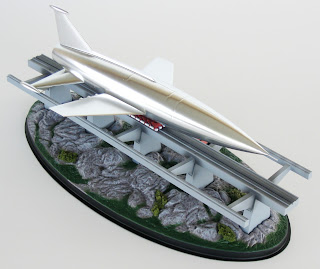 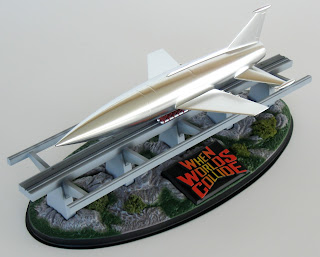 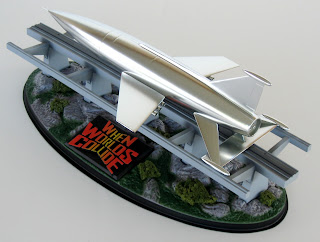 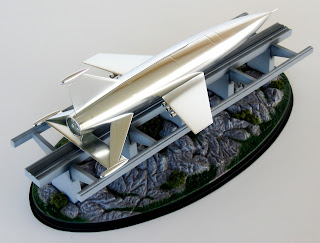 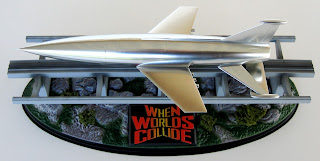 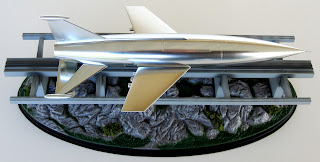 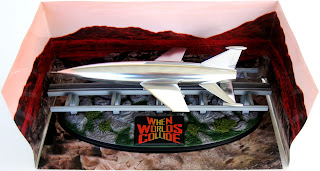 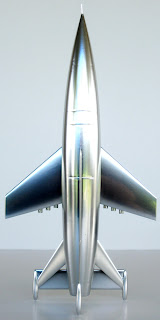 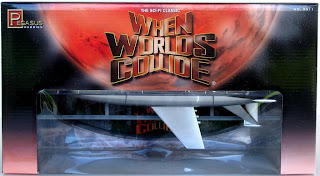 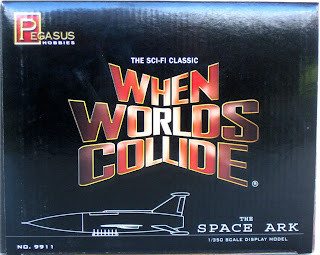 The Space Ark has landed 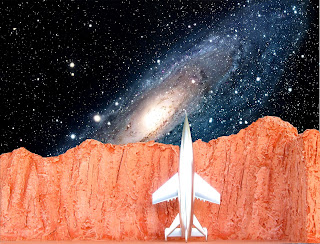 Have a Happy End Of the World!
SEE YOU ALL TOMORROW!!!
Posted by Ed and Bettina Berg at 1:00 AM