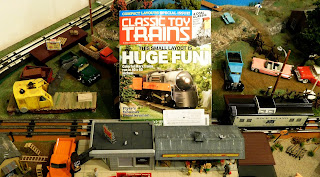 Welll, the big news of late is that my Edge of Town micro-layout made it into the pages of Classic Toy Trains! I have the cover photo as well as a feature article! Whoopee! LOL When I was a young 'un and into HO scale model railroading, I marveled over the layouts of people like John Allen, Jim Findley, Earl Smallshaw, John Olson, and Malcolm Furlow. Their layouts were stunning and I wanted a big layout like theirs and have it featured in Model Railroader magazine (a Kalmbach Publishing product). Alas, my HO scale mega-layout never came to be, Classic Toy Trains magazine didn't yet exist, and I wasn't into toy trains until much later in life.

Fast forward to 2016 when I dismantled my larger Marxville and Plateau layout and resurrected my small portable layout from its resting place out in The Cave turning it into a permanent display. But that was fine and I enjoyed running trains on a smaller board. By 2019 I had grown tired of its toylike appearance - perhaps my yearning to go back to my HO scale days when detail was king! I didn't want the layout to be micro-detailed like the HO-scalers do, but I wanted it to be more than it was and so I embarked on an evolutionary journey to transform the relatively plain, uninspring train board, into a semblance of a model railroad - albeit with toy trains running on it. The process started in late 2019 and after nearly a year of on-again, off-again work, the layout began to take on the appearance of nicely detailed model railroad. Towards the end of 2020, one of my Y'allTube subscribers (Cody Holmes) mentioned that I should submit some photos to Classic Toy trains - it couldn't hurt! I was expecting perhaps a photo or two to show up in their 'Photo Album' section but in Nov-Dec 2020 after a series of discussions with Roger Carp, Senior Editor at CTT, an extensive questionnaire, and a few extra photos it became apparent that we were aiming for a full fledged article. It was to my great surprise then that a couple of weeks ago I saw the pre-release announcement of the upcomning May 2021 edition featuring my layout AND cover photo. WOW! Was I stoked.

So as it turns out, I did make the pages of a Kalmbach magazine, it just wasn't Model Railroader. AND, not only was it not a mega-layout, but was among the smallest layouts they've ever featured for 3-rail O-gauge trains. Everything worked out in the end. A Big shout-out and Many Thanx to Cody for giving me that nudge to submit photos, and to Roger Carp for working with me to polish up a nicely done article on my tiny Edge of Town layout!

For anyone interested, digital copies can be purchased at Zinio:

Posted by Ed and Bettina Berg at 8:28 AM